The exponential growth has been connected to the high interests of institutional investors in the market. It was also spurred by the growing interest in digital assets in the past year.

The crypto ETF only had $150 Million in November last year. But three months later, the value had increased by more than 7 fold.

Chief Executive Officer of the ETF, Hany Rashwan revealed that the firm has witnessed an unusually high rise in its crypto ETP products recently.

The Binance Coin ETF retains the highest percentage of the amount while a Bitcoin product (ABTC) comes second. Other dominant ETFs include Tezos (AXTZ), Ether (AETH) and 21Shares HODL.

Rushwan also stated that the 21Shares has provided the right avenue for investors to invest in the company’s ETF through the International Securities Identification Number (ISIN). It’s the same identification standard for other assets such as derivatives, stocks and bonds.

He said more individuals, families, private banks and wealth managers are increasingly having interests in crypto assets. Many of them are now investing in different cryptocurrency assets with high expectations of increasing the value of their balance sheet in the long run.

The dominance of Binance (BNB) in the ETF is a result of the recent surge of cryptocurrency, as it leapfrogged USDT to become the third-largest crypto asset in the world.

21Shares became popular after rolling out the world’s first multi-crypto ETP, when it listed SIX Swiss Exchange in November 2018. The firm has been actively evolving and diversifying its crypto ETP offerings. It also witnessed a 200-fold increase in its AUM.

Earlier this month it rolled out the world’s first ETP based on Polkadot (DOT). 21Shares has also been involved in other small projects to present more investment opportunities to investors. 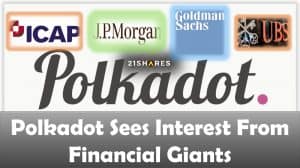