In order to transact just about any type of business in our economy, you need to interact with the banking system. For many, this is a relatively smooth experience, however there are times that it can be cumbersome and excluding. With the advent of cryptocurrencies such as Bitcoin, which was meant to eliminate these issues, it is easy to see why people would question if it is better and more efficient to use cryptocurrency instead of a bank.

Blockchain technology makes cryptocurrency, such as Bitcoin, a superior form of monetary exchange vs the current banking system. This is primarily due to cryptocurrency being a permissionless system, allowing anyone to participate and creating more fluent business transactions. The banking system is a permissioned system which often prevents participation and hinders business transactions.

The current set-up of the banking system is beginning to show it’s inherent flaws. As inflation continues to soar and the Federal Reserve (The Fed) continues to hike interest rates in an attempt to slow the rising rate of inflation, our banking system is feeling the strain. Read on as we discuss the pros on cons of cryptocurrency and the current banking system, the difference in security between both and the future of banking.

Whether you are a business owner or just an average person who has their paycheck deposited into their bank account, you have a need to interact with the current system of banking in this country. For many of us, this interaction is minimal and relatively painless.

The difficulties with the banking system come when you need more from it. This can be things like you need a loan for a home or a new vehicle or you need to send international money transfers to conduct business transactions. For either of these types of transactions, you need permission from the bank.

Our current system of banking is debit based. In a nutshell, this means that new money is created when larger purchases need to be made, or in the case of The Fed, when they need to buy stocks and bonds to prop up the economy.

At then end of the day, this means there is more money in circulation. The repercussions of this include the devaluation of the currency which causes rising inflation rates.

Many people consider this type of activity the reason for the market crash in 2008.

Many polls have been done since The Fed bailed out the banks in 2008 to prevent a collapse of our economy and, no surprise, the average, everyday, hardworking American disapproves of this bailout.

However, many of these types of banking activities continue to this day. The result of carrying these excessive amounts of debit is the continued crumbling of our economy and more invasive Fed intervention.

If you want to understand more about how the current banking system is stealing our money from right under our nose, check out the video I have placed here from Mark Moss.

When considering if one thing is belter than another, seeing a break down of the advantages and disadvantages is often useful. So, let’s take a look at those pros & cons for both banking and cryptocurrency.

Is Cryptocurrency More Secure Than Banks?

No matter if you decide to put your money, and ultimately your trust, in a bank or a cryptocurrency like Bitcoin, you want to be sure that your money is secure and available when you need it.

Blockchain allows cryptocurrency to be more secure than banks. Blockchains use cryptography to secure their ledger. The verification and security of a blockchain is heavily dependent on the age of the chain and the consensus algorithm used to verify the blocks.

You don’t have to search far for the latest hack of a government agency or business. It seems like you hear about a new breach involving your personal information every day.

If you want to learn more about why it’s important to secure all of your activities online and with crypto, head over to the online privacy & security series of articles I wrote here.

Though, as a whole, banks do a relatively good job at protecting your personal data, hacks do happen.

So the next logical question is, can crypto be hacked?

While the answer to that would need to be directed individually, blockchain to blockchain, the threshold to accomplish a hack of this nature is extremely high. This makes a potential hack very unlikely.

But what about the government?

After a backlash, the administration has backed off of this, but that isn’t the end of the story. Ultimately, the government, by way of the IRS, can still obtain this information via subpoena.

Furthermore, in August 2022 we got the Inflation Reduction Act. Built into this new law was IRS funding. This funding, according to the IRS is earmarked to allow for the hiring of almost 87,000 new agents by the year 2031.

So, why do we highlight some of these things?

Frankly, because there are varying levels of security.

Beside ensuring that funds are secure and accessible, there is the right of any person, you and I, to be safe in, and of our own person. This means free from unreasonable search by the government.

With this tenor in mind, the security of cryptocurrency takes on a whole new meaning and drives us to our next question.

While the pros of having cryptocurrency replace the current banking system are extensive, the likelihood of this happening, especially in the short term, is quite low. However, for those of us who are cryptocurrency proponents, we remain optimistic that banks will eventually be unseated by cryptocurrency.

The banking system is entirely controlled by The Fed and whether they admit it or not, they are influenced outside entities. These entities include, the U.S government, the World Economic Forum (WEF) and the International Monetary Fund (IMF). This influence is used to maintain their control over the world economy and the monetary system.

Part of exerting that influence on the banking system means having the ability to dictate what is considered legal tender within a country’s borders.

As of this writing, only one country has defied these entities and their influence, El Salvador. El Salvador has accepted Bitcoin as legal tender.

Check out our article where we delve deeper into cryptocurrency being considered money here.

In order for cryptocurrency to replace the current banking system, it would first need to penetrate it. This is obviously something that governments and central banks will try to prevent.

This has been shown the case in a lawsuit filed by Bitcoin Bank, Custodia in June 2022.

In order for a bank to do business in the United States they must receive a Master Account from their local Fed.

In the case of Custodia, the Kansa City Fed was processing this application prior to The Fed intervening in April 2022. The lawsuit claims that Custodia has been waiting over 19 months for a decision, which according to The Fed should take between 5 days and 1 year.

Given that governments are racing to create their own digital currency called Central Bank Digital Currency (CBDC) it would seem that they are looking to change the face of banking.

The Future of Banking

The future face of banking likely looks very different than it does today.

It doesn’t matter if you are a crypto advocate or not, due to changes in the technology, the way people want to access their money and moves by the governments and central banks, change is inevitable.

You can see these changes gaining momentum.

For example, the banking consumer has pivoted and no longer wants a checking account to pay for goods and services.

Today payment processing app software are front and center. Some of the most notable are PayPal, Venmo, Cash App, Stripe, Revolut and AliPay.

Frankly, the use of this style of payment and access to money is only going to grow. This is thanks to the younger generation of consumers being raised with technology and finding things like banks antiquated.

So, what does this look like for the retail banking sector?

With a drop in demand for in person banking service, the need for physical banking locations will decline.

This is already happening across the U.S. where the major retail banks are abounding their local brick and mortar locations.

Questions Related To Crypto vs Banks

Delving into this topic can just increase the number of questions you have about cryptocurrency vs banking. I talk about topics like this in my monthly newsletter. If you want to stay up to date with the latest discussions, you can sign up here.

In the meantime, let’s take a look at some of the other questions you might have.

What are the benefits of cryptocurrency over the dollar?

There is little doubt that cryptocurrency have many things to offer the world. Read More About The Benefits of Crypto Here.

Given the level of insider and regulatory influence in the current system we are required to function in, it is easy to wonder who controls crypto. Read More About How Crypto Is Controlled Here. 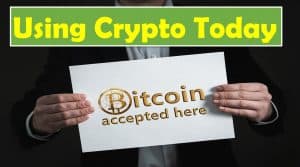 Cryptocurrency: How Is It Being Used Today?
next post
Importance of Cryptocurrency and Why It’s Good For The World 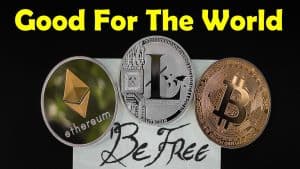